Trading has its humble beginnings from the days of trade by batter which prompted the story of the cowrie shells: West Africa’s first official/unofficial currency. The value of the cowrie has since been preserved in the memory of many generations and money museums as a currency and fragment of the past, representing the journey of West Africa’s trade system.

There are roughly about 200 species of cowries in countries across the world. The tiger cowrie stands as the fairest of them all, being of the mollusk in the family of Cypraeidae. They are originally small sea snails and quite many in the Indian Ocean.

Furthermore, in the decades it flourished, the cowrie had a dual function for West Africans. It served as both a legal tender and also assumed the position of spiritual/divine element for the people. The cowrie further has a robust symbolic attribute because of its shape, which is aesthetic in nature in bearing semblance to a pregnant woman’s belly; thus, the symbol of fertility. As a result of its deep symbolism, the cowries are worn by the chief priest of Fiji as a symbol of status and rank, while the Ifa priest and priestess make great use of it in making foretelling. 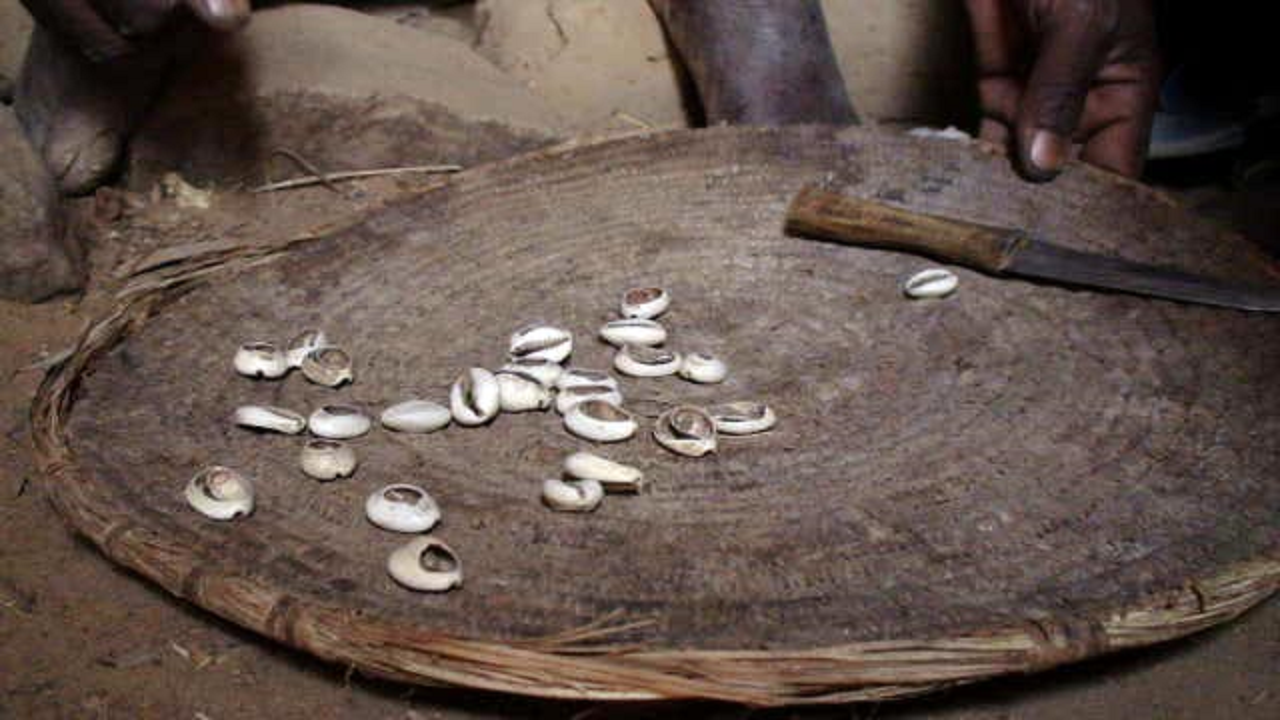 A Dogon fortune teller tries to divine the outcome of a soccer match with cowrie shells | Image: Cultures Of West Africa

Again, the gash as well is metaphorically seen to ward off evil eyes, since the underside appears like a black pupil against a pearly white surface. Perhaps, these lingering mythologies/mystical perceptions of the cowrie has fuelled the life it still carries in our modern world despite its diminished value centuries ago in the world of finance.

Hence the present functionality of the cowrie relies merely on its supernatural properties, having no financial role in economics. It has since evolved in this age of advancement into virtual money like bitcoins and ethereum, having some financial experts call it the cowrie integrated system. This succinctly depicts the evolution of currencies and how this legal tender operates together with virtual money.

For a while, the cowrie existed with various currencies across West Africa. So, in the 18th century, it was extensively used in West Africa along trade routes; including the Indians, South East Asia, and in the Middle East. Even the Chinese shaped the form of the cowrie into their pictograph for money. Apparently, the importance of Cypraea moneta (money cowry) was greater than other geographical areas of origins, therefore, the grip of West Africans on the cowrie was so strong that in 1907, the French prohibited its usage, marking the beginning of the end of the cowrie. The French prohibited its usage in an attempt to demonetize the cowrie in order to avert trade from the British gold coast to their colony.

However, as a result of the sentimentality of Western Africa to the cowrie, there was a strong resistance that elders rebuffed the declaration, instead of safeguarding the cultural values of cowrie to be used at traditional ceremonies. The idea that they were being stripped of their freedom made the conflict linger, hence their sovereignty had to be defended. Therefore, asides from being a physical entity for financial gains and the ability to acquire diverse commodities, the worth of the cowrie carried the freedom of the people. This can be parallel to many secessionist outcries as they come up with their own currency as a representation of their freedom. An instance is the proposed Fadaka by a sect.

Undisputed, the cowrie is an element of spiritual connection to the soul and identity of the people. Thus, the elemental appeal being symbolic of the traditional beliefs of the people and is seen in the usage of the cowrie at traditional celebrations by fortune-tellers and diviners. Tracking the pictorial illustration of Nigerian banknotes and coins, it appears that there was no point in time that the cowrie was used to reminisce the past. Rather, the money was made to carry pictures of landscapes, vegetation and faces of past nationalists. But the only note thus far that culturally represents the cowrie is surprisingly the recommended Fadaka. The cowrie, a symbol of the past and culture, has since become represented by some financial institutions with elaborate decorations of the cowrie in their buildings to commemorate what used to be signifying trade and culture. Also, holding on to the past, the cowrie is printed on currencies of some countries.

The currency is not just mere paper, but a historical documentation of the struggles of a people, therefore currencies are used to tell pertinent stories and beginnings of a nation. Though cowrie is extinct in one viewpoint, it features in other ways today, being used as a medium of cultural expression to gorgeously adorn the hairstyles of both men and women. Cowries also thrive in the present era because of its gaining ground in the fashion scene where it is used by some as an activist expression. It is used as a necklace, jewelry and clothing. Remember Beyonce’s clothing in her music video “spirit”- that’s an example as a way of libation calling on the African ancestors. Hence, cowries have become a favorite artifact, used by craftsmen as an ornamental piece for tourists who are drawn to these rare antiques, not forgetting the ATR believers who use them also for ritual offerings amongst other things.

The beauty of this precious currency formed by nature is one of the core attributes to the cowrie. The cowrie was initially by all the sources of Mother Nature to represent currency before the modern currency spread. Therefore, through the cowrie, nature’s gift to earth and free of manmade qualities could speak of the divine connection with the human race.

Whether seen from the perspective of its spiritual symbolism or its past connections with economic trading, the cowrie is an artifact that represents the historical journey of West African culture. Its dual nature enabled it to be used by persons as average as culture activists, and as powerful as the Ifa priests. Its survival from its past usage as a currency, to a symbol of Africa’s rich cultural heritage, speaks of both its dynamism and potency.

Art And The 3 Stages Wedding Ceremony